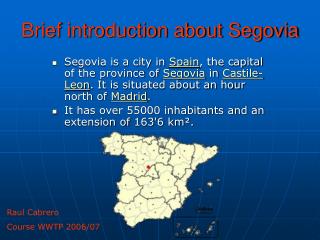 Brief introduction about Segovia. Segovia is a city in Spain , the capital of the province of Segovia in Castile-Leon . It is situated about an hour north of Madrid . It has over 55000 inhabitants and an extension of 163'6 km². Raul Cabrero Course WWTP 2006/07. BRIEF INTRODUCTION ABOUT MYSELF - . passion &amp; dream. “i have a dream – a song to sing, to help me cope with

A brief Introduction About Marketing - Marketing is a method to exchange needs and wants to satisfy humans requirements.

Segovia - . by nick weinschrott. location. a walled city in spain located within the iberian peninsula north of madrid

HubSpot Inbound Marketing | PDF - Marketing is baseless if it is not streamlined by any profound organization. hubspot is

Population of Spain - . by : bettina gáti. spain. officially the kingdom of spa in located o n the iberian peninsula.