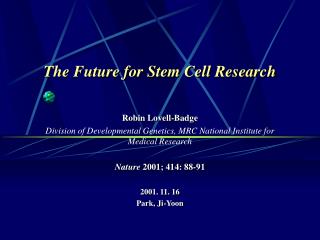 The Future for Stem Cell Research

The Future for Stem Cell Research Stem Cells in the Spotlight - . louisa a. stark, ph.d. overview. what is a stem cell ? why are we interested in stem

What Are Stem Cells? - . stem cells are specialized cells that can produce several different kinds of cells just like the

Therapeutic Cloning and Stem Cell Therapy - . by: breanna lent chrissy douglas naveed stegamat. how much do you know

Stem Cells - . courtney, anne, and rachel. what makes it a stem cell?. capable of dividing and renewing for long periods

Stem Cells and Regenerative Medicine - Outline of presentation. what is stem cell research?what are the different types

Stem Cell Research - . the facts and what you can do by aedan lombardo. the facts about stem cells. (and why they’re