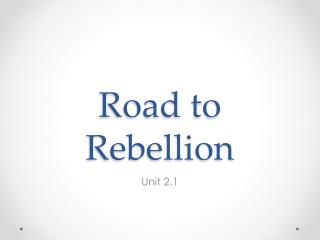 Road to Rebellion. Unit 2.1. French and Indian War Effects. Albany Plan of Union – Attempt at unity during war. Ben Franklin’s idea and “Join or Die” snake cartoon Why did both Britain and some colonies not like it? Proclamation of 1763 outrage Colonists see “ Redcoats ”

Shays Rebellion to Constitution time - . from there to here and back again, a hobbits errrr , a nations tale. shays

Shay’s Rebellion - . why it occurred. farmers had huge debts due to high taxes- due to the rev war( not for the

Rebellion - . recap . so if you remember the government was exactly fair how so?. robert gourlay. scottish canadian went

TEENAGE REBELLION - . what does the word rebellion mean?. dissent from an accepted moral code or convention of behaviour,

Whiskey Rebellion - . farmers in western pennsylvania staged a rebellion against a government tax on whiskey and the