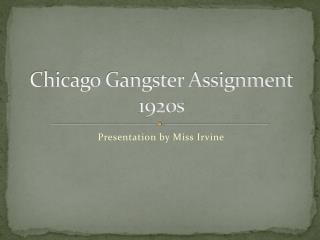 Chicago Gangster Assignment 1920s. Presentation by Miss Irvine. Alphonse Gabriel Capone. Born on January 17, 1899 Has two nicknames: Al (to shorten his name) Scarface insulted a woman while working the door at a Brooklyn night club - was attacked by her brother Frank Gallucio . .

The Roaring Life of the 1920s - . americans confront changes in society as women enter new roles and the mass media gains

Chicago: All That Jazz - . bob fosse style. http://www.youtube.com/watch?v=7uipkwcyxku. in this lesson, we will aim to:.

Alphonse Capone (Al Capone) - . alphonse capone was born in january 17, 1899. his parents were gabriele his father that

The extent of recovery in the late 1920s - . l/o – to identify the achievements and underlying problems of the weimar

Unit 5 Lecture 10 - . the roaring twenties. coolidge and prosperity. harding replaced by calvin coolidge “do nothing