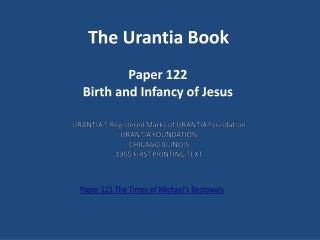 The Urantia Book. Paper 122 Birth and Infancy of Jesus. Paper 121 The Times of Michael's Bestowals.

Life Science Chapter 4 - . bellwork. discuss a scientific observation you made over the weekend. make a book!. work with

The Urantia Book - . paper 14 the central and divine universe. paper 13 - the sacred spheres of

The Urantia Book - . paper 121 the times of michael’s bestowal. paper 120 the bestowal of michael on

The Book of Mormon - . 2 nephi 26-30 nephi prophesies and counsels. 2 ne 25 prophesied of the destruction and scattering