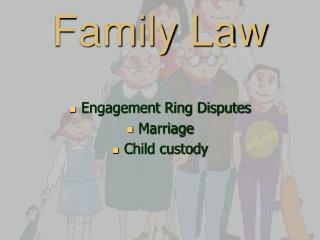 Family Law. Engagement Ring Disputes Marriage Child custody. Do you have to give the ring back?. Traditional Gift Law. Gift: irrevocable if the donor intended a gift, the donor delivered the gift, and the donee accepted, taking dominion and control over the gift Family Law - . breakup of marriage, property and custody. what is family law?. an area of law dealing with family and

FAMILY LAW - . exploring marriage and divorce. the family has changed . today’s families have changed and consist of:

Family Law - . what is a family?. no precise legal meaning for “family” different interpretations for zoning,

Family Law - At the law office of terri m miles, you the client benefit from the experience and dedication of an attorney

Family Law - When things go bad in a marriage, every other part of a person’s life can be affected. it is rare that a

Family Law - John poyser solicitors in manchester- is a team of 100 years experienced and skilled in criminal, family,

Family Law - . breakup of marriage, property and custody. what is family law?. an area of law dealing with family and

Berkson Family Law Solicitors | Divorce & Family Law - At berkson family law solicitors, we are here to help you when