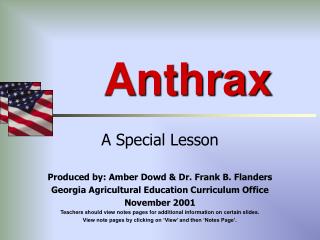 ANTHRAX - . by: justin tursellino. anthrax is

Anthrax - . cassidi , carley , and douglas. what is anthrax…?. anthrax is an infectious disease caused by bacteria

Anthrax - . references what you need to know http://www.bt.cdc.gov/agent/anthrax/needtoknow.asp frequently asked

Anthrax - . the world’s most famous bacteria.

Anthrax - . by j aysten m . lance m . and shawn r . investigation . the u.s fbi was involved in the anthrax

Anthrax - . march 23 rd , 2010. bacterial pathogens in soil. many bacteria are natural residents of the soil some are

ANTHRAX - The anthrax bacillus, bacillus anthracis, was the first bacterium shown to be the cause of a disease- koch’s