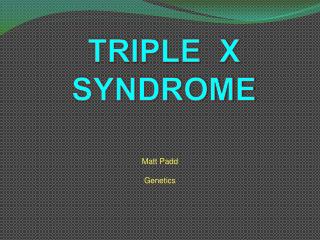 TRIPLE X SYNDROME. Matt Padd Genetics. How does it occur?. FRAGILE X SYNDROME - . what is fragile x syndrome?. the karyotype occurs in the x chromosome. people with fragile x

Fragile X Syndrome - . by: shelby phillips and kylie fulmer. what is fragile x syndrome?. a genetic condition that causes

Fragile X syndrome - . by: dustin king. who gets it?. there is no specific group who can get the syndrome, but it is

Fragile X Syndrome - . this powerpoint file contains a number of slides that may be useful for teaching of genetics