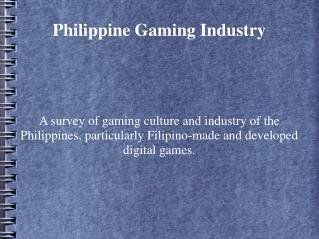 A survey of gaming culture and industry of the Philippines, particularly Filipino-made and developed digital games. Philippine Gaming Industry. Narrative vis-a-vis Cyclical Immersive Interactive. Are Digital Games Art?. Should it be made by a Filipino? Distributed by a Filipino?

The Market Potential of the Four Gaming Zones of Kansas - . presentation to kansas lottery gaming facility review board

Advantages and Disadvantages of Wi-Fi. - Freedom of wi-fi. wireless laptops can move from place to place. can stream

Periods in History of Philippine Music