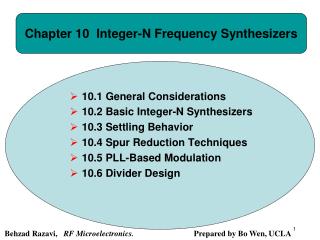 Chapter 7 - . atomic structure. light. made up of electromagnetic radiation. waves of electric and magnetic fields at

Chapter - . overview of analog and digital technologies. chapter objectives. explain the basic concepts of analog and

Integer linear programming - . when all of the decision variables in an lp must take only integer values, the resulting