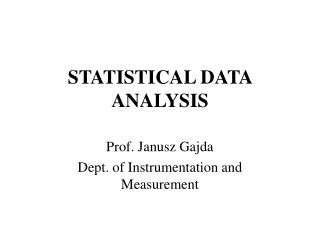 STATISTICAL DATA ANALYSIS. Prof. Janusz Gajda Dept. of Instrumentation and Measurement. Plan of the lecture. Classification of the measuring signals according to their statistical properties. Statistical Data Analysis - Surveys are an excellent method for companies, businesses, or any other entity to receive

the statistical analysis of data - . by dr. dang quang a &amp; dr. bui the hong hanoi institute of information