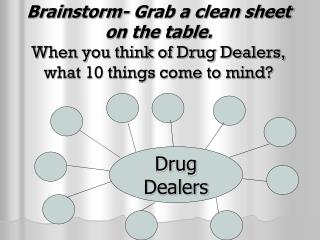 Brainstorm- Grab a clean sheet on the table. When you think of Drug Dealers, what 10 things come to mind?. Drug Dealers. Focus on The Media Understand the Media Before We Talk about Current Issues. What makes up the Media?. Television Newspapers The Internet Magazines Radio. The CAGE Questionnaire for Drug Company Dependence - . have you ever prescribed c elebrex tm ? do you get a nnoyed by