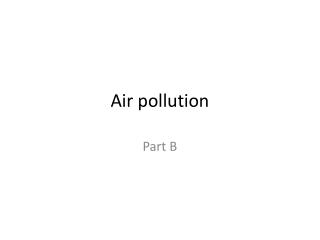 Air pollution. Part B. A Model of How Pollutants That Make Up Photochemicals Are Formed. SMOG…. Is worse on hotter days Increases as traffic increases

Environmental Chemistry Option - . e1.1 - pollution • pollution refers to changes in the equilibrium (or balance) of

SHIPBOARD OIL POLLUTION EMERGENCY PLAN - . sopep. structure of sopep. should be based on : imo resolution mepc 54(32)