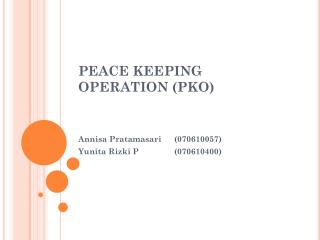 Keeping the Peace - Mindfulness. keeping the peace. being in the here and the now. walking meditation every one of us has

Keeping the Peace - . the golden twenties?. the league of nations. part of woodrow wilson’s 14 points for peace

KEEPING THE PEACE - . the importance of resolving conflict. what is conflict?. a fight or battle (war) a sharp

International Peace Keeping Organizations - . by: john lubenow and hao chen. league of nations. it was a precursor to the

United Nations Peace Keeping Missions! - . un peacekeepers are sent into countries at end of civil war or conflict. why