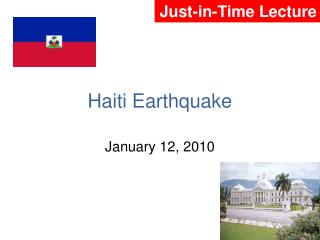 Just-in-Time Lecture. Haiti Earthquake. January 12, 2010. Haiti's presidential palace before (top) and after the earthquake Photo: AFP/GETTY . Satellite Photos of Haiti Before and After the Earthquake. What is the Earthquake?.

Introduction to Liquefaction - . what is liquefaction?. liquefaction-when the strength and stiffness of a soil is reduced

Locating the Epicenter of an Earthquake - . the triangulation method. earthquake. in an earthquake, stored energy is

Haitian Creole vs. French in Haiti: How Language Divides a Nation - . history. 1697- spanish control ends with the treaty

Japans Earthquake / Tsunami Disaster - On march 11 at 2:46pm jst a massive 9.0-magnitude earthquake occurred near the

Earthquake - An earthquake is. ... earthquake statistics. 15% of the population lives in zones of potential major