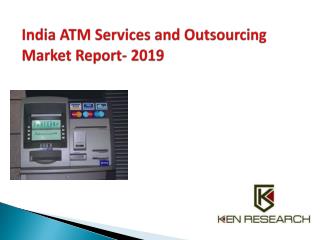 India ATM Managed Services and Outsourcing Market Outlook to 2019 - Spurred by Expansion of the ATM Network presents a comprehensive analysis of market size by value of the ATM Managed Services and Outsourcing Market in India, market segmentation by number of ATMs existing in the country by different models and by value, Outsourced ATMs in India by different banks. The report entails the market share analysis and company profiles of major players in the market and market dynamics. Comprehensive analysis on growth drivers, issues and challenges in the market, recent trends and developments and cost components and services rendered to banks by the service providers and recent investments in the sector has been presented in the report along with the future analysis. The ATM industry in India is rapidly transitioning from the traditional methods of ATM operations into the internationally accepted ones. Companies operating in other sectors in India as well as abroad are eyeing the Indian ATM managed service and outsourcing market since the market offers immense potential. Facilities Management Services Market in India 2014-2018 - To get details:

Waste Management Market in India 2015 - To read the complete report at:

Outsourcing Bookkeeping/Data Processing Services in India - P b tech impact solutions pvt. ltd is one of the leading

Outsourcing To India? Try Our Outsourcing Services India - Outsourcing in india is for the most affordable price? try our

Best 10 IT Outsourcing Companies in India - With highly trained and experienced pool of it professionals, indian it