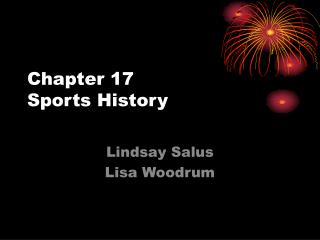 Chapter 17 Sports History. Lindsay Salus Lisa Woodrum. Sports History and the History of Sports. What’s the difference? Sports history is a subdiscipline within a larger academic field. The history of sports is the broad body of knowledge about past practices and purposes of sports. Chapter 17: Pharmacology, Drugs and Sports - . pharmacology is the branch of science that deals with the action of drugs