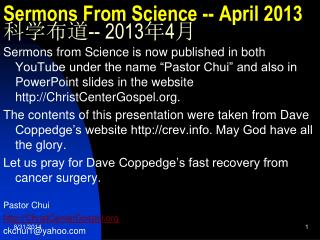 Sermons From Science -- April 2013 科学布道 -- 2013 年 4 月. Sermons from Science is now published in both YouTube under the name “Pastor Chui” and also in PowerPoint slides in the website http://ChristCenterGospel.org. Spring 2013 Training Materials - . reading mathematics science. overview. these training materials are based on the