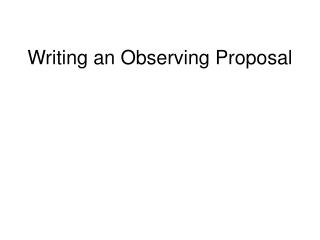 Writing an Observing Proposal. Writing a good observing proposal is challenging because:. You have a committee (many judges) The judges are often not experts in your field

3.1 Observations and Measurement - . you are constantly making observations—you hear a noisy motorcycle going by or you

Statement of the Problem

Our Goal - . the goal of the islamic computational astronomy network (ican) is to: set up a single, global standard for