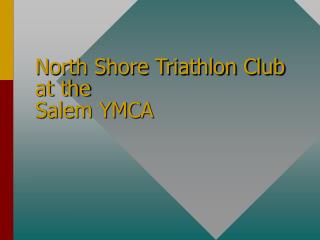 North Shore Triathlon Club at the Salem YMCA. Goals of the Club This club is designed to attract athletes of the north shore to join a friendly, coed club that was created to give people group support and camaraderie in one of the worlds most grueling events.

; KILL.PPE by Dan Shore - SysOp - . ; the shoreline bbs. ;. ; purpose: this ppe will allow the kill command to accept

How to Triathlon - . by: joey de fazio. presents…. the best place to start…. what is a triathlon?. swim bike run.

Map and Compass - Malcolm cunningham tararua tramping club. map and compass. getting a sphere onto a plane (mercator

Introduction to the YMCA Leadership Competency Self-Assessment - Welcome!. . 2. congratulations on making a commitment to

Welcome to Romford YMCA - . our day together. welcome and introduction a quiz - fun but informative! covering history,

The Hunt of 1692 The Salem Witch Trials - . history of salem. presentation by: jason lemley. timeline of events. the

Ecology - Study of interactions between organisms and their environments. ecology. what you will learn in ecology . what