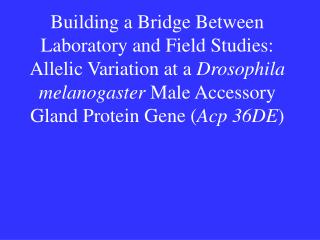 Building a Bridge Between Laboratory and Field Studies: Allelic Variation at a Drosophila melanogaster Male Accessory Gland Protein Gene ( Acp 36DE ). Research Goal and Motivation. The goal is to investigate natural genetic variation at the 36DE gene in the laboratory and the field. Goal and Motivation - . goal and motivation. to study our (in)ability to detect inconsistencies in the illumination of

GOAL SETTING AND MOTIVATION - . effort in organization should not be a random behaviour effort need to create result and

Our Motivation and Goal

Motivation and Goal Setting - . by: lin lawson. motivation. no one can teach you how to think, you must motivate yourself

Research Motivation - The potential for agricultural land use changes in the raccoon river basin to reduce flood risk: a

Motivation II: Equity, Expectancy, and Goal Setting - . chapter seven. after reading the material in this chapter, you

Motivation: How To Set A Goal - . by: amanda musgrave cg 100, winter term. dapps: an easy acronym and memory device. d