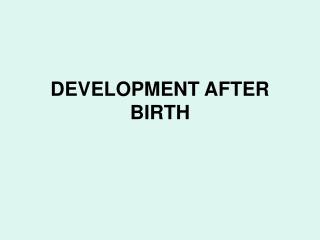 DEVELOPMENT AFTER BIRTH. The general pattern of physical development after birth is a continuation of the pattern of the late fetal period : rapid growth continues with a relatively steady increase in height and weight. NUTRITION AFTER BIRTH - . “nutrition and growth of children affects not only their survival but also their quality of

Vaginal Birth After Cesarean (VBAC) - . the changing tide. what are hospital policies?. about 30% of all us hospitals in

Newborn Baby Care after Birth - After your baby is born and you have had time to bond and nurse your toddler, your little

Birth and Development - . gestation : period of time that embryo/foetus spends in the uterus parturition/birth: process

Birth and development - . beginning of life cycle. fertilization- only one sperm fertilizes the egg. in the first week

Prenatal Development and Birth - . chapter 4. the period of the zygote zygote  blastocyst cell differentiation % of