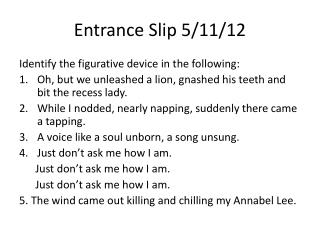 Entrance Slip 5/11/12. Identify the figurative device in the following: Oh, but we unleashed a lion, gnashed his teeth and bit the recess lady. While I nodded, nearly napping, suddenly there came a tapping. A voice like a soul unborn, a song unsung. Just don’t ask me how I am.

Personhood for the Unborn - . what you can do? support ci 102. why so passionate about this issue?. we must stand up for

Blending Sounds - . say the sound of each letter or letters then blend to make a word. f. ish. fish. sn. ake. snake.

Labor Law “Reform” – What Form Will It Take? - . clinton s. morse, esq. introduction. why is it suddenly important

印尼 － yogyakarta 之旅 - . my daughter said “i am scared.”. petrol sold in bottle. a convenient source of

Branch Circuits Chapter 2 - . introduction. the purpose of branch circuits is to carry the current from the service

Trashketball - . the phantom tollbooth: lesson 2. rules of trashketball. stay in your seats at all times. you will have

Do NOW (Review) - . who came up with the idea of capitalism and “the invisible hand?” what is the “invisible hand

CLE - . l -z. labor ominia vincit. work conquers all motto of the state of oklahoma. labyrinth. the maze designed by

INTRAVENTRICULAR HEMORRHAGE - . mohammed pgy-2. i. ivh is an intracranial hemorrhage that originates in the

Discounted Cash Flow Valuation: Many a slip between the cup and the lip… - . aswath damodaran www.damodaran.com. some