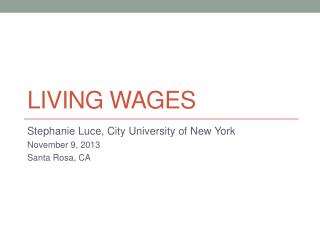 The Living Wage - . what is a living wage?. an early demand from trade unions was the demand for wages that would allow

What is One Fair Wage? - . one fair wage is a campaign set up by the scottish youth parliament (syp) to encourage

THE MINIMUM WAGES ACT, 1948 - . applicability of the act. applicable to whole india central government act of 1948 and

The Case for the Living Wage - . south london fawcett society 26 october 2009. what is the living wage?. the real minimum