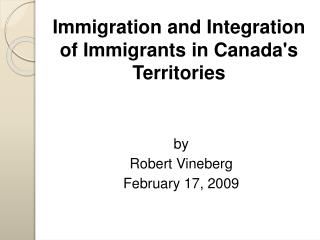 Immigration and Integration of Immigrants in Canada's Territories

Immigration and Integration of Immigrants in Canada's Territories

Canada and United States of America - . vikings. vikings were from norway, sweden and denmark norsemen (vikings)

O, Canada! - . the road to confederation, 1763-1867. background. much of modern-day canada first claimed by france in

Research on Immigration and Integration in the Metropolis www.riim.metropolis.net - . lectures 3 and 4. development

Ukrainian Immigration to Canada - . the push and pull factors, to the daily life of the ukrainian immigrants who first

Fostering an Integrated Society: An Aspiration or a Reality? Delivered by: Deborah Carson Tunis 21 October 2010 - Harold