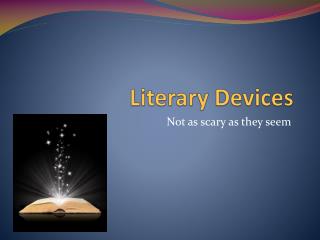 Literary Devices. Not as scary as they seem. Devices of Figurative Language. Metaphor, Simile, Personification, Hyperbole, Synecdoche, Metonymy. Metaphor. Denotation: A direct comparison between two things, where one thing takes the place of another. Example:

Chapter 10 - . supporting i/o devices. you will learn…. how to install peripheral i/o devices how to use ports and

Week#8 Supporting I/O Devices - . click the graphic for assessment. objectives. learn about the general approaches you

Literary Lenses - . ways to look at stories (so that you appear to be smarter). literary criticism…. is a way to

To kill a mockingbird chapter 11 literary devices - . by: josh granger. imagery. it gave me a good image of mrs. dubose

What devices can we design for? - . the internet is now available to a vast range of devices, both static and mobile

Literary Terms Jeopardy - English 9 directions for online viewing: use the internet explorer browser, not netscape. when