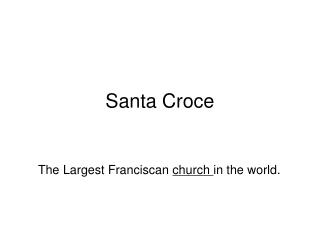 Santa Croce. The Largest Franciscan  church in the world. Who are these?. Pretend you know these people. Susan. Bob. Today Bob and Susan are visiting Santa Croce. It is our job to tell them how to get around the church. Susan still doesn’t really know anything about Santa Croce.

This is Basilica St. Vitale, in Ravenna - . this church is decorated with many 6 th century byzantine mosaics telling the

Florence and Tuscany during Dante’s times - . italy and tuscany. dante’s house in florence. the baptistery in