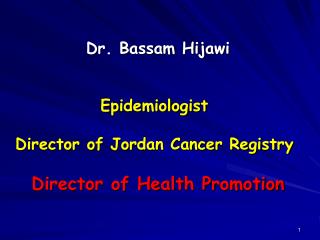 Dr. Bassam Hijawi Epidemiologist Director of Jordan Cancer Registry Director of Health Promotion. In Epidemiology. The most important tool for measuring the risk of occurrence of a particular event in a population during a given time period are :-. Rates Morbiditly Rats: Dr Neil Bradshaw Director of Enterprise - . the role of ipr as seen by the academic community les annual conference,

Dr Maggie Watts Director of Public Health NHS Western Isles - “in pregnancy: no alcohol - no risk”. but why?. dr