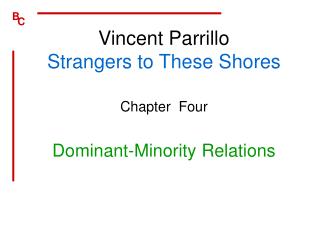 Vincent Parrillo Strangers to These Shores Vincent Parrillo Strangers to These Shores

Vincent van Gogh - . by nina jokic 3m. introduction. vincent van gogh is one of the most famous painters in the world. he

PSY 321 Dr. Sanchez Stereotyping, Prejudice and Discrimination: Intergroup Bias - . what is the state of intergroup bias

EQ: What are Stereotypes and Prejudice? 4/22 - . bell ringer: write your own definition for stereotype. how are people

Karen Kesler , Vincent Politano , Kennedy Paynter - Differentiating the impact of the physical and biotic components of

Prejudice and Discrimination Prejudice - . prejudice is a system of negative beliefs, feelings, and action-orientations

By the Shores of Silver Lake - . vocabulary 4 th grade. conductor. a person in charge of a train or subway after we

Vincent van Gogh Paul Gauguin - We shall enlarge our enterprise, and try to found a studio for a renaissance and not for

Prejudice and Stereotyping - . important definitions. ethnocentrism stereotypes prejudice and racism ethnic and other