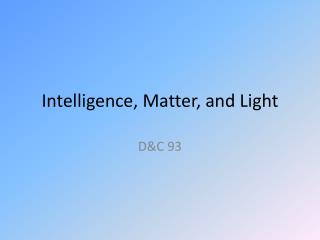 How We See - . there are three different types of cones in our eyes. they are sensitive to different colors of light. The Smarts That Matter Most! - . building your eq to develop positive relationships cedar valley apics january 10, 2012.

Intelligence - . what makes us smart? or not so smart?. top 10 facts about iq. school attendance correlates with iq iq is

Multiple Intelligence Theory Theory into Practice: Getting students to read! - Differentiated instruction “what is

The Magic of Light - . what is light?. our primary source of light is the sun. light travels in straight lines at a speed

1. Ambient light in a scene with 3 spheres. - 3. the three spheres illuminated by specular light. imagine an extremely

The Light of Transcendence and the Vicissitudes of Time* - . peter gratton , ph.d. memorial university of newfoundland.