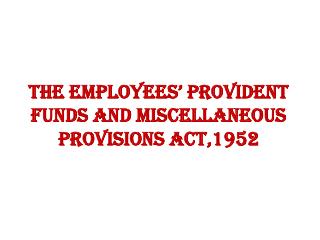 The Employees’ Provident Funds and Miscellaneous Provisions Act,1952. EPF Act,1952. The EPF Scheme was framed under Section 5 of the Act which came into force on 1 st November,1952. Special And General Grant Provisions - . hvrp general and special grant provisions. are the terms and conditions of the

HVRP General and Special Grant Provisions - . are the terms and conditions of the grant award – “the fine print”.

How to Deal with Problem Employees - . chapter overview. the chapter identifies common types of problem behavior among

Miscellaneous: - . - we will be going directly back to campus - after a few relief stops - check for final launch no/go