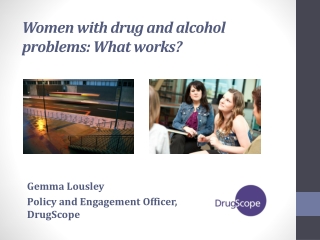 Alcohol and Other Drug Use - . percentage of high school students who ever drank alcohol,* by type of grades earned

Why Moderation? - . rationale for moderation strategies. most people with alcohol problems are not alcoholics the more

Teens and Alcohol and Other Drug Use - . ais/dhaka middle school parent night. objectives. to develop an awareness of

Drug Abuse - . … the prevalence of severe drug abuse problems and their consequences has increased since 1985…. the

Facts About Alcohol - . • you may not think of alcohol as a drug, but it is. a drug is a chemical substance that is

Alcohol - . what is alcohol?. alcohol is a drug found in certain beverages that depresses the brain and nervous system.

Alcohol in Pregnancy the hidden impact - . november 11th 2011. alcohol in our society. acceptable drug not perceived as

Alcohol - . what is alcohol?. alcohol or ethanol is a type of alcohol in alcoholic beverages alcohol is created by a