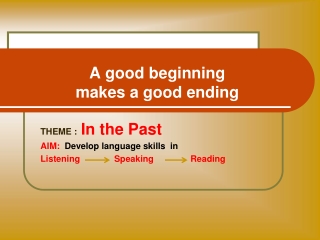 A good beginning makes a good ending. THEME : In the Past AIM: Develop language skills in Listening Speaking Reading. Past Simple. went. He. to the shop. go. Did. he. ?. TO BE WAS/WERE DID. COULD DID. + ?. What could you do ? Beginning Sounds - Introduction. each letter of the alphabet makes a sound.let's learn the sounds together.. . f. . c. b.

What makes a good Medical Assistant Great!! - . by: kristan cox rma. what is the difference between a good medical

Writing A Good Essay - . a good essay . . . has a beginning, middle and end. uses paragraphs can be clearly understood.

What makes a good Presentation? - . use of visuals clear lout voice/eye – contact the entire group is involved present

Warm up - . quietly compare the maps at your table what do they have in common?. warm up. which is largest- greenland,

“In The Beginning…” - …. “in the beginning…”. lessons about life revealed in the scripture’s first book.

What Makes a Video Game Good? - . a place where graphics and mechanics in gaming is nothing more but just a portion of

What Makes a good introduction? - . and why are they so freaking important!?. why bother writing a good

Lesson 8 - . e-mail. all writing has a beginning, a middle, and an ending. this is true for letters as well as expository

Good Beginnings - Why is the beginning the most important part of writing?. good beginnings. give them a beginning that

Thesis Statements: What makes a good one? - . what is a thesis?. a thesis statement declares what you believe and what

We’ll Never Say Good-By - . with friends on earth we meet in gladness, while swift the moments fly, yet ever comes the