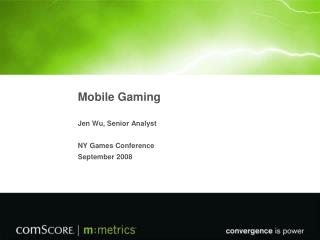 Mobile Gaming. Jen Wu, Senior Analyst NY Games Conference September 2008. How many mobile gamers are there?. 21.4% of the US mobile population, or 48.4 million, play games on their phone each month.

Mobile Gaming Truck for Birthday Parties - Birthday parties include a lot of enjoyment along with a lot of work, by

The Biggest Trends in Mobile Gaming! - Mobiles have become essential for us and so have mobile games! they are fun to

2018 Gaming Mobile Industry Research Report - This study takes a look at the state of gaming on mobile platforms. the