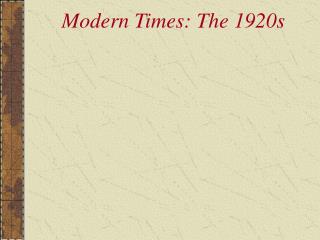 Modern Times: The 1920s. How and why did business and government become allies in the 1920s? How did this partner­ship affect the American economy? How did American foreign policy develop during the 1920s? Why did a mass national culture develop after World War l?

1920s Check Point - . the 1920s were characterized by all of the following except increased migration of blacks to the

The 1920s - . essential questions. why did the u.s. experience so much political and social change during the 1920s? why

Psychological Therapies in the Modern Era - . centre for psychological therapies may 19 th 2009. may you live in