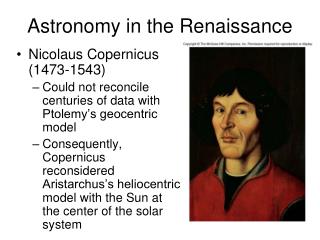 Astronomy in the Renaissance

Astronomy in the Renaissance

Astronomy- The Original Science - . bellwork : imagine that it is 5,000 years ago. clocks and modern calendars have not

Naked-Eye Astronomy - . the most important graph: 1/r 2. force of gravity (and em) falls off like that brightness of

Galileo, PTOLEMY, COPERNICUS,KEPLER - . there contribution to astronomy!. galileo. galileo thought the earth was in the

Astronomy and the Renaissance - . know about copernicus and the sun-centered model know kepler’s laws of planetary

Copernicus - Ast101 lecture 3 jan. 29, 2002. modern astronomy. the beginning of the modern age in astronomy began with

Renaissance Astronomy - . isaac newton, who discovered the law of gravity, once wrote, “if i have seen further, it is

Astronomy in the Renaissance - . tycho brahe made observations (supernova and comet) that suggested that the heavens were

Astronomy in Ancient Civilization - . in order to understand the future, we must look to the past. astronomy impacted

The Origin of Modern Astronomy - 0. note that the following lectures include animations and powerpoint effects such as

History of Astronomy - . how did we get to where we are today? we stand on the shoulders of giants. greek, egyptian,