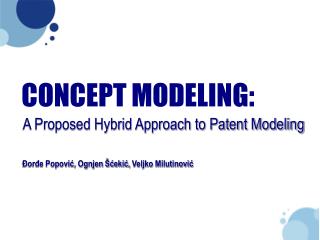 Concept - . concept. identify solids. a. determine whether the solid is a polyhedron. then identify the solid. if it is a

Concept - . use a similarity statement. if Δ abc ~ Δ rst , list all pairs of congruent angles and write a proportion

Concept - : encourage solutions that would reduce the overall operating expense and transform the laundry room into a

Concept - About luxform luxform is a hong kong based company with factories located at both hong kong and shanghai.

Concept Modeling - . by the end of this session you will be able to: explain what a concept model is and how it is used

Concept of 3D Modeling - . model the representation of the object or system modeling the creation and manipulation of an