Dealing with the Aftermath of Suicide - PowerPoint PPT Presentation 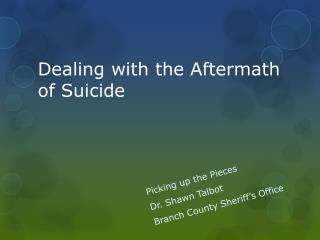 Dealing with the Aftermath of Suicide Dealing with the Aftermath of Suicide

God’s Dealing With Sin - . the justice of god’s love. understanding the principles of god’s government and the

Dealing with difference - . peter sullivan. overview. the australian context articulating the challenge of diversity of

Suicide Risk Assessment in the ED - . a practical approach for emergency physicians robert orman, md. is this important?.

SAVING LIVES: Understanding Depression And Suicide In Young People – A Training For School Personnel - . sponsored by

Australian Approach to Dealing with Cybercrime - . “we should not be fighting crime of the twenty-first century with

Introduction to the Program - More than sad: suicide prevention education for teachers and other school personnel