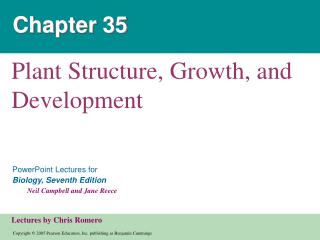 Chapter 35. Plant Structure, Growth, and Development. Concept 35.1: The plant body has a hierarchy of organs, tissues, and cells. Plants, like multicellular animals, have organs composed of different tissues, which are in turn are composed of cells Chapter 35 - . the nature of light and the laws of geometric optics. introduction to light. light is basic to almost all

CHAPTER 35 - . plant structure and growth. plants are the first link in the food chain through photosynthesis . this

Chapter 35 - . a boy no more. “doesn’t cut the mustard”. not successful, not good enough or be high quality. let

Chapter 35 - . section 1 molluska. characteristics of mollusks. some are filter-feeders while others are fast-moving

Chapter 35 - . a time of ferment imperialism and politics 1901–1916. america’s colonies. annexing the philippines

Chapter 35 - . 0. plant structure and growth. what is one result of an organism having meristems? a rapid change from