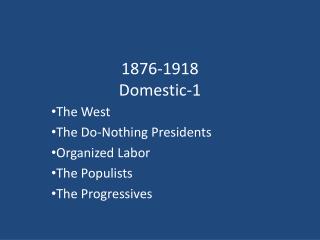 1876-1918 Domestic-1. The West The Do-Nothing Presidents Organized Labor The Populists The Progressives. The West. Andrew Carnegie and the Steel Mills - . by karsten knuver. summary. from 1850-1914, there were many influential men and

Populists and Progressives - . an era of reform. in the late 1800s…. liberals start looking to the government to make