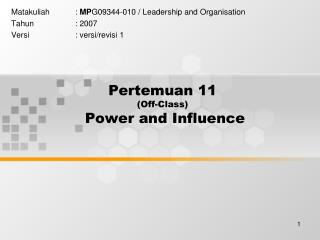 ☆ Read to Think &amp; Learn To Explore ☆ Tips to Power up the Reading Class - . you are the only expert to your

THE PURPOSE FOR THIS CLASS - We're glad you made this big decision to take this class. this class is the second of

Introduction to Leadership - . overview what is leadership and why does it matter? what leaders and managers do are

The influence of cultural values on work behavior: why and how individual power distance belief matters - . jiing-lih