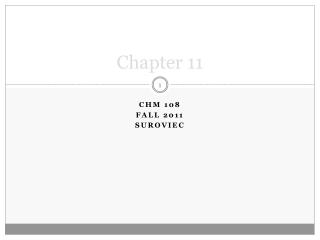 Chapter 11. CHM 108 Fall 2011 Suroviec. I. Solids, Liquids and Gasses. A. Changes between phases. Using temperature, pressure or both you can convert from one phase to another. II. Intermolecular Forces. Originate from interactions between charges, partial charges and temporary charges.