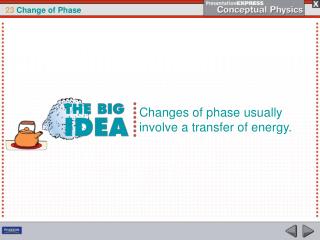 Changes of phase usually involve a transfer of energy. Changes of phase usually involve a transfer of energy. The four possible forms of matter—solid, liquid, gas, and plasma—are called phases. Matter can change from one phase to another. The phase of matter depends on its temperature and the pressure that is exerted upon it. 23.1 Evaporation.

Changes of phase usually involve a transfer of energy.

PROPERTIES OF SOLUTIONS - . solution terms. solution. a homogeneous mixture of two or more substances in a single phase.

World of Matter - . standard 9. what is matter. matter is something that occupies space and has mass. non – matter.