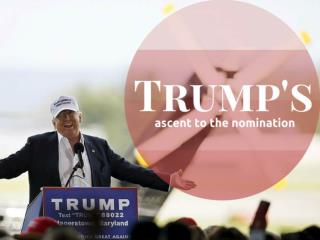 After eliminating 16 party rivals Donald J. Trump officially received the nomination of the Republican Party for the White House. The Songs of Ascent - I was glad when they said to me, &quot;let us go to the house of the lord.” our feet are

Ascent of the Klan - . ika imperial klans of america. k k k. rise of the kkk was do to the ever changing of a traditional

The Ascent of the West

From Nomination to Symbol Allotment - . nomination of candidates. by - k.f. wilfred, pr. secy. and ashish chakraborty

NOMINATION FORM - The time 2 shine awards november 2013, to be held at the historic dockyard, commissioners house .

The Ascent of a Leader - . a great book on leadership by: thrall, mcnicol and mcelrath. some quotes from the book worthy

Psalms of Ascent - . unity psalm 133. a song of unity on a journey. anticipation of reunion reminder of past difficulty