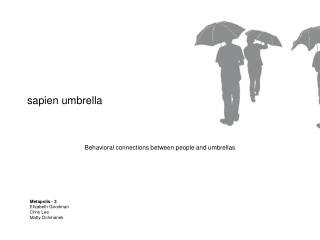 umbrella - . in describing the term above, you may neither use any of the terms below or combinations of them: protection

Umbrella Summer - . book by lisa graff this by kaylee d. summary/ back of

Umbrella Organisations - . if you are going to spend a lot of money, say for example on a car or a holiday, it may be a

The Umbrella - . by kelly. map of china. *the history*. used umbrella to signify wealth and rank by color. made of

Umbrella Insurance - . note information in this presentation is derived from insurance for dummies by jack hungelmann .

umbrella projects - To start the presentation, click on this button in the lower right corner of your screen. the