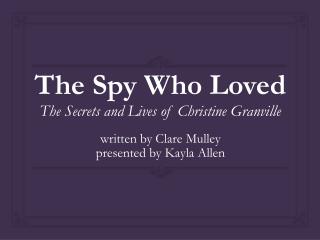 The Spy Who Loved The Secrets and Lives of Christine Granville The Spy Who Loved The Secrets and Lives of Christine Granville. written by Clare Mulley presented by Kayla Allen. Early Life. born Krystyna Skarbek lived 1908 – 1952 spent her childhood “basking in her father’s attention, and supported… by her mother’s love and money”. Young Adulthood.

The Spy Who Loved The Secrets and Lives of Christine Granville

How to play ‘Who lives under the sea?’ - . instructions. click on the animals that you think don’t live under the

Who lives in the soil ?? - . the furrow. soil is an archive of life on earth!. quantifying biodiversity. most occur in

The Girl Who Loved Wild Horses - . 1/7. identifying cause and effect. my dinner burned because i was absorbed in my book.

The Lives of Stars - . from studying nearby stars and stellar clusters most stars are on the main sequence stars become

The Lives of Cells - By: lewis thomas. the lives of cells. kimberly nelson. summary. these 29 essays were originally

Abe Lincoln: The boy who loved books - . vocabulary words from. towering. towering means very high or tall. his cabin was

The Lives of Stars - . copy. evolution of stars. newton’s laws of gravitation state: all masses attract each other this

Spy your Loved One with Spy Tracking Software for Cell Phones - . by john jake http://www.spybubblev.net. advantages of

Who lives in grasslands? - . where can we see animals?. how do you think a prairie dog pup would play?. which grassland

The Secrets of the Cube - The dessert:. your view of realityyour perspective on lifeyour psychological landscapethe