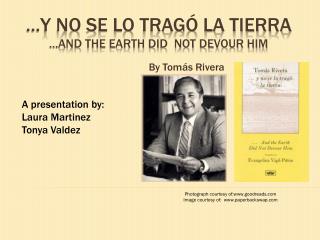 A presentation by: Laura Martinez Tonya Valdez. By Tomás Rivera. …y no se lo tragÓ la Tierra …And the earth did not devour him. Photograph courtesy of:www.goodreads.com Image courtesy of: www.paperbackswap.com. Born 1935 in Crystal City, Texas. Son of Mexican citizens.

Bellwork - . get textbook—chapter 2 scientists have evidence that the center of the earth is active with intense heat

Does it Really Matter Whether the Earth is Old or Young? - . so what if the earth is billions of years old? what’s the

Earth Processes - . how do earth processes affect our everyday lives?. natural events such as volcanic eruptions,