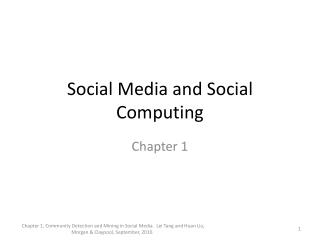 Social Media and Social Studies - . what is the use of a book, without pictures or conversations? -alice, alice in

Social Media and Social Change - . reading arguments 10/15/2013. reflection—what did you notice? what stands out to

Social Computing - . a social structure in which technology puts power into the hands of individuals and communities, not