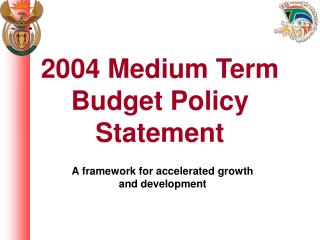 Expenditure - . opportunity cost. is making a decision/ choice based on limited/ scarce resources . the item not selected

LINKING THE BUDGET TO THE NATIONAL DEVELOPMENT PLAN - . ministry of finance, planning &amp; economic development and

Presentation to the Portfolio Committee on Education - . 15 march 2006. contents. what is saqa saqa’s mission

Independent forecasts and the budgetary process - . lessons from the netherlands by henk don former director of cpb

Moving Towards Long-Term Action on Tax and Budget Issues - . a presentation at the 2004 grantmakers in health fall forum