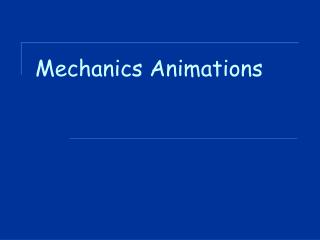 Mechanics Animations. Average v Instantaneous Speed. Instantaneous speed of your car is your speed at a particular instant in time. Average speed is a measure of the distance travelled in a given period of time. Velocity & acceleration vectors. Animations! - . results of the mock experiment. what is the molar concentration of solutes in the tissue? what is the y s

Nid Animations - Here at nid animations, you can realize your dream of doing fashion, design and architecture courses

Sputtering Animations - . attached in this powerpoint presentation are two animations of sputtering of a polystyrene film

3D Animations - . ruben sierra p.4. skills to be a 3d animator. -to be an animator you have to be creative with your work

Medical Animations - We work with orthopedic surgeons and other expert witnesses to deliver fast, accurate, and stunning